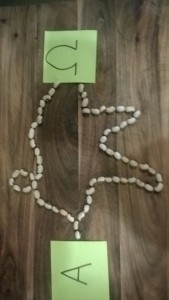 From Alpha to Omega

I am currently working on the revisions of my book Pearls of Wisdom and I have been reflecting on the paths my characters have travelled and how the decisions they made shaped those paths.  Having planned two, possibly three more books to tell their tales I have also been contemplating where their paths should take them next.  I’ll admit as master of their fates I know the end game.   I find I write best when I begin with the end in mind.  The fun is crafting the twists and turns, the bumps and detours that will happen to them on the way to their destiny.  Recently one of the cable channels has been running the movie Sliding Doors starring Gwyneth Paltrow and having never seen it, I took in one of the showings.  I am sure most of you have seen it (I am always way behind the pop culture curve) and if you haven’t, the movie explores the idea of what would happen if you missed a train, thus setting you on a different path.  The gist was that despite the details being different in each scenario (the one catching the train, the one missing it) the big ideas, the important people still happened to that one person. So what if fiction is not the only place where the ultimate outcome, the things we are destined for, end up on our paths regardless of the paths we choose or are chosen for us?  Have you ever had that feeling you are on the right path, or somehow the universe is in perfect alignment with you?  I find it comforting to think despite the detours and bumps along the paths in our lives we will somehow end up at all the right destinations. I also offer the thought that the bumps and detours enrich the journey and make those destinations all the more to savor.  The fun in writing is creating the twists and turns, after all, what fun would it be to read a book where all is easy or the characters go from Alpha to Omega in a straight and quick line?  So here is to the journey of 2015!  I know there will be bumps along the way and a few detours, bring it on!  I take solace I will end up where I am meant to be.