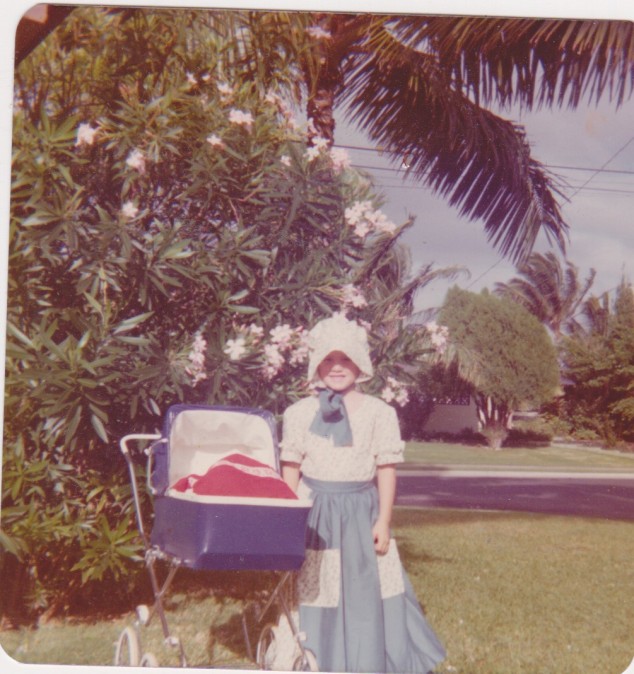 I make no secret that Halloween is my least favorite holiday. I am willing  to admit I’m a scaredy cat. Even as an adult, after I watched the movie Sixth Sense, I had to sleep with a nightlight for a week. As a child, the candy was not enough of a draw for me to forget my fear. Candy I can take or leave, now if they had been giving our ice cream or cheese and crackers, I might have been more motivated. What I did love was the excitement of pretending to be someone or something else for a few hours.

Even today, I enjoy getting invited to a costume party. There is an interesting psychology involved to the selection of costume. I prefer the creative homemade costume to store bought, I love how ingenious some people can be.

Back in 1975, the Little House on the Prarie was popular on TV, but more than that, I had read most of the series at that point. My favorite was, Little House in the Big  Woods and I even wore this get-up to school. I became Mary Ingalls, I always thought she was the better-behaved one. When you are a kid you have the freedom to play dress-up every day. I loved putting on my mother’s old dresses and heels. I loved pretending to be part of the books I read.

Book characters are a great source for costume ideas. Halloween gives us the chance to become those characters for a little while, even as adults. I still don’t think I would choose anything scary but I would love to host a literary costume party, though some of my friends might think that was a bit nerdy. Today I might be a professor from Harry Potter, or Stephanie Plum, even Lula, from Janet Evanovich’s hilarious series. Miss Marple might be fun. I could go on and on.

So while I still don’t care for the trick or treating and the frightful things, I can appreciate that Halloween gives us permission to be someone else for a few hours and no one raises an eyebrow.

2 thoughts on “The Upside of Halloween”