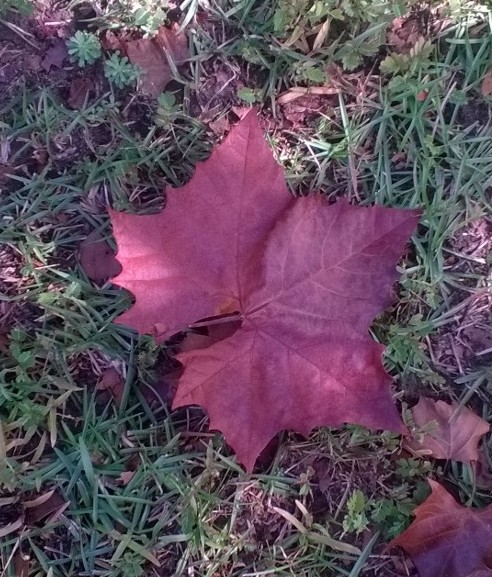 Sycamore leaf in my front yard

I’m not sure when it happened but fall has definitely arrived here in the lowcountry. I had been searching for signs in the world around me and in the long-range forecasts by the local weatherman. But then October got fully underway and I got distracted.

It happens to me several times a year and I suspect it is the same with others whose primary careers are in education. August, October, and May are the busiest months and I get lost in the vortex of school. October might surprise some, but remember it is the first report card and hence parent conferences for each student. This year it seems to arrive too soon, I suppose due to the eclipse and the hurricane disturbing our normal school year patterns.

When the calendar turns to autumn and parts of the country are already revelling in cooler temperatures and changing leaves, here in the lowcountry we are still sweltering in the heat and high humidity. Yet we press on with fall activities such as football games and pumpkin patches.

October flirts with fall. A few cooler or at least lower humidity days, followed by a resurgence of heat mark most of the month. The air-conditioning hums along, it is still needed most afternoons and we all try to resist turning on the heat for those few cooler mornings. I personally make a rule no heat on until November, so I have gotten dressed at lightning speed a few mornings. I may give in a day or so early this year. It has been in the seventies, but today is in the sixties with a low in the morning threatening the upper thirties. No worries the heat will be on for only a night or two before we return to a few eighty degree days.

I have been so wrapped up with report cards, conferences and trying to be not all work by participating in the busy fall social season, I tuned out for the last week or so and this morning I was taken by surprise by the marsh grasses waving golden heavily amongst the green. The beauty of the waving grass with the water in the background took my breath away.  Leaves along the road are tinged with brown and yellow and my Sycamore in the front has begun dropping its leaves. The breeze is blowing cool, a front is moving through and taking the warm air with it, albeit temporarily. I am giddy with anticipation for crisp air.

When I noticed today that the hints of fall from a few weeks ago had turned into the signs of the season I lamented the fact I had not been paying attention to the moment of transition. I had missed it because I was too wrapped up in other things. I finished the last of my conferences this week and I did manage to participate in two social events, book club and a faculty night at an art place, however, by Friday I was so exhausted I came home and crashed. It wasn’t until Saturday morning I realized I missed a friend’s annual Halloween party. I have enjoyed that party many times and I am sad I missed this year, especially since some in attendance I don’t get to see that often.

The message I think I received from the party miss and the marsh grass change is to slow down and take the time to notice even in the midst of all the busyness. We only have so many falls to enjoy in this life, I want to soak them in. I realize I can’t shirk my responsibilities and nor do I wish to, but I also know things aren’t in balance when I get so exhausted I don’t remember an annual party. I hope you realize it’s not the party but the people that I regret missing.

So today I’m going to seek out some leaves to crunch under my feet and breathe in the fresh air.  I will renew my intention to pay attention to the world around me and appreciate each day for the many gifts it gives.