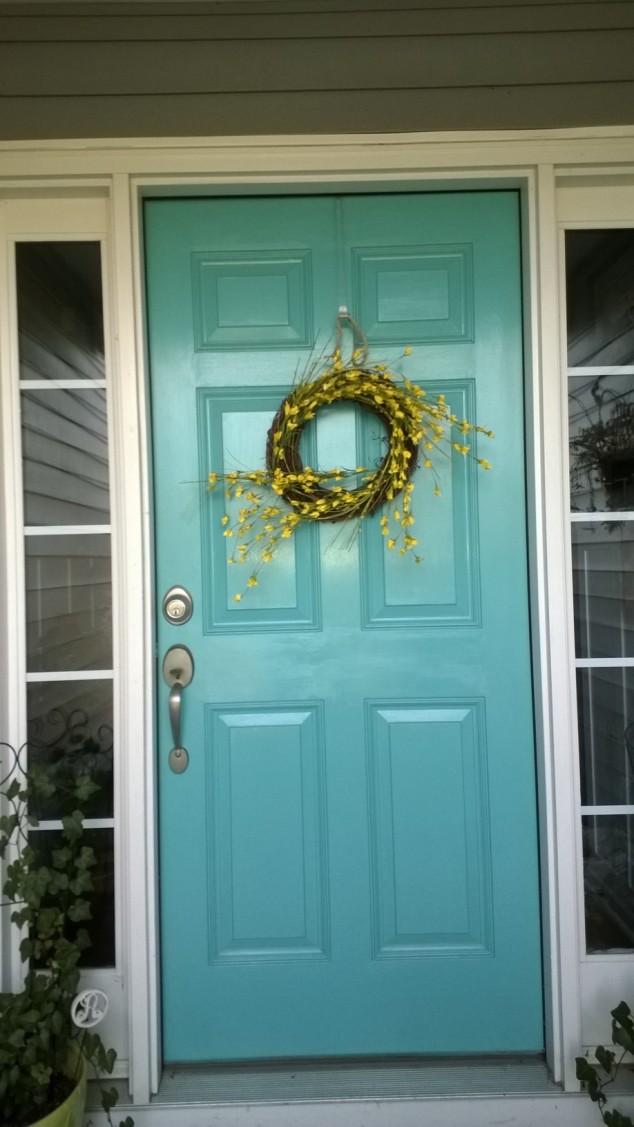 My thrifty and crafty new entry

The groundhog saw his shadow, but I don’t think the Kiawah Island alligator Charles Ray did. Apparently, he has been predicting local spring since 1932. I just learned this little fact on the local news. How did I not know this colorful bit of local lore? Here in the South Carolina Lowcountry, I am certainly hopeful for early spring, after all, some of my daffodils are on the verge of unfurling their sunshine blooms.

Winter is not my favorite season, although I try to appreciate the gifts it gives just like every other season. As soon as Christmas is over I begin to dream of warmer days, more hours of daylight and mother nature putting on her fashion show.

Recently I fell in love with a wreath in a catalog with beautiful greenery and yellow silk tulips, it was selling for $139 and I almost gave into the temptation. In the end, I couldn’t justify the splurge when I had some rotting fence boards to replace and other needs to be tended to.

This morning I looked at my beautiful blue door and the now fading Christmas wreath that was still in place. To clarify, my holiday wreath was adorned with seashells and a cream ribbon so it didn’t scream Christmas, but the live greenery was beginning to brown. It was time for it to come down.

Still craving a cheerful yellow wreath to grace the door, I ventured to the craft store and $18 later I returned with a grapevine wreath and several stems of yellow flowers with greenery and a spool of roping.

It is not as large and lush as the wreath from the catalog and I could not find yellow tulips like the catalog wreath, but I found decent looking and feeling blooms that created the effect I was hoping to. So it is an inspired creation, a low-budget version of a high-budget item. Plus, I enjoyed a small project to exercise my creativity in a form other than words.

Now my door makes me smile again and I hope it says to the world, “Welcome Spring!” Even if real Spring is still a few weeks away I’m pretty sure here in South Carolina we will have it before our friends to the North. Hang in there Northern friends and family, the snowdrops and crocuses will be there before you know it!